Experimental research has shown the extraordinary potential of the addition of short fibers to cement-based materials by improving significantly the behavior of concrete structures for serviceability and ultimate limit states. Software based on the finite element method has been used for the simulation of the material nonlinear behavior of fiber-reinforced concrete (FRC) structures. The applicability of the existing approaches has often been assessed by simulating experimental tests with structural elements, in general of a small scale, where the parameter values of the material constitutive laws are adjusted for the aimed predicting level, which constitutes an inverse technique of arguable utility for structural design practice. For assessing the predictive performance of these approaches, a blind simulation competition was organized. Two twin T-cross section steel FRC beams flexurally reinforced with steel bars and without conventional shear reinforcement in the critical shear span, were experimentally tested up to failure. Despite the experimental data provided for the definition of the relevant model parameters, inaccuracies on the load capacity, deflection, and strain at peak load attained 40, 113, and 600%, respectively. Inadequate failure modes and highly different results were estimated with the same commercial software, indicating the need for deeper analysis and understanding of the models and influence of their parameters on their predictive performance. 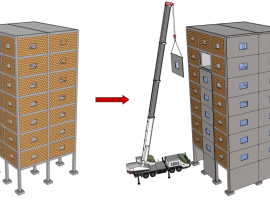 Posted in International Journals (ISI)Publications
by CiviTestPosted on 19 January, 202126 January, 2022 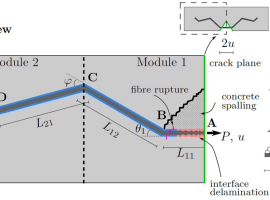 In the present work, a multiscale model for fibre reinforced concrete (FRC) beams failing in…